Our experience of Medellin was truly a tale of two cities.

Expecting a big, unruly city, we hopped off our night bus from the north, onto the metro all the way down to the El Poblado District…and it was beautiful, pretty is probably a more accurate description.
Had we taken the wrong night bus? This was not the ‘Narcos’ city we had anticipated, idyllic two story streets decorated with flowers and small trees, punctuated on every corner by quaint little coffee shops and eateries. Our hostel put on a rooftop BBQ, we ate like kings looking out over the twinkling lights of the vast basin that Medellin sits in, wondering which dimly lit areas were the ones to avoid. 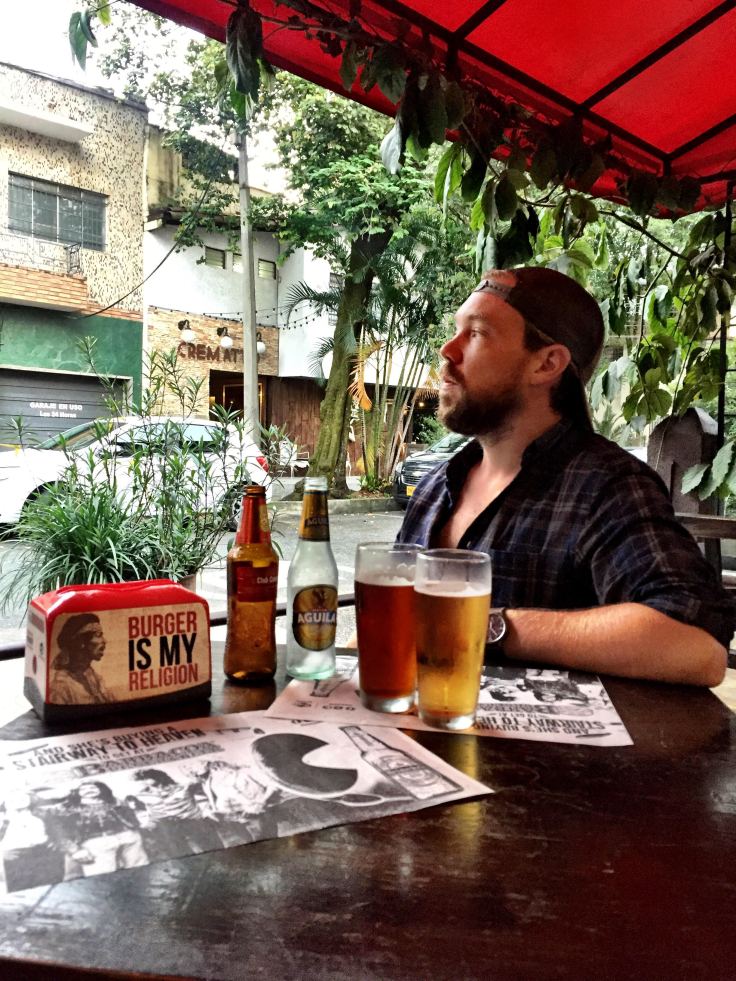 That very next day we broke one of our golden travel rules, no organised tours. Hopping into an Uber with two English lads we had met at Sugar Cane Hostel, Tom and Lloyd, hoping to be en-route to this chaos that is Medellin we had heard so much about. And oh how we were, more on that shortly.

So, the tour, a free walking tour to be exact. We would normally steer clear of this kind of behaviour, but a few reputable sources we had met along our journey had recommended this one highly. It started off ok, meeting at the train station with our guide Juan, he seemed pretty friendly, the odd dad joke here and there. So an hour in we had maybe moved 200 yards, and in that time we had sat and moved three times, boredom was setting in, the jokes were getting old and fast. As Juan explained the political instability that has been Colombia since the 80’s he persisted in professing impartiality with one breath, and spouting the virtues of the extreme left with the next. I’m done. Luckily Tom and Lloyd were on board too, and with the next group movement we backdoor’d it. We heard Juan warning the group that they were headed for  what he called ‘Papaya Level 4’, so “watch your belongings and be polite” I believe were his words.

Using a map provided, the four of us decided to complete the tour alone, saving ourselves four hours and a diatribe of personal politics. It was with the turn of the next corner that Medellin lived up to its reputation; the machismo cool that I was so enamoured with in Cartagena had now turned all sideways stares and over the shoulder whispers. There was no charm here, a myriad of shops selling the same old gaudy shit, the buildings were new and old at the same time, all the faces draped in aggression.

Any self respecting Englishmen will attest to that when there’s trouble in the air you can almost smell it, and approaching a busy crossing I smelt it. A small disturbance around 10 yards ahead, like a gentlemen I put Adele behind my arm, and proceeded to have a right good nosey. Two men squared off; one older, more dishevelled and possibly homeless swung his worldly belongings at the other with one arm, ‘lets ‘ave it’ I thought, with the other he swung a big old kitchen knife, and ‘fucking, leg it’ I thought. The situation turned wholly sinister and fast, I pushed Adele to the side and the four of us got on our toes back to the train station. That Papaya Level 4 is legit.

From the taxi back we watched a guy strolling the busy high street in broad daylight, getting nostrils deep in a bag of Colombia’s finest/or worst, who knows. I smiled to myself, Medellin was super aggressive, and I liked it.

Over the next few days we explored some of the Pablo Escobar ‘sights’, because of course that’s what you do in Medellin. His final resting place, next to his family and Limon his stalwart bodyguard, the rooftop where he met his maker (now a Spanish school) and a few of his properties around the city. We went out in El Poblado one night, a relatively charmless affair though we made as much fun out of it as we could.

Our last night we wanted to go watch the Quarter Final clash between Athletico Nacional (Pablos team) and the Jaguars, our hostel offered a tour for 90,000 pesos and we very nearly paid it. Thank god we were feeling adventurous, apparently safety is one of the points for taking the tour, but I’ve navigated enough Football Stadiums in my time to know where and what to avoid. We jumped the Metro to Estadion for 2,000cop, found a tout and copped a ticket for 30,000, that’s 32,000 for those mathematically illiterate that’s a saving of 58,000 Colombian Pesos (we checked the next day with a girl that went on the tour what the extra bought her, literally nothing it turned out, result!).

The game was a great way to bid farewell to a crazy city, the stadium without any roof revealed the lights of the Medellin basin from its top. The moon cut like a sickle illuminating the clouds that cooled the air, the fans unwavering throughout the 90 minutes, the band played, the people marched and sang relentlessly, the guys walking up the aisle every other minute selling pints got me good and drunk, we split a few minutes before the final whistle to beat the hoards that were a lot drunker than i.

Medellin was an attack on the senses, and I really appreciated it.